We’re beaver believers – you can be, too! As of Monday, The Association for the Protection of Fur-Bearing Animals has become a corporate sponsor of The Beaver Believers film project.

We met Sarah Koenigsberg on this week’s episode of Defender Radio, where she told us about her own background, the development of the film and why it’s going to matter.

Koenigsberg went to school not for film, but for environmental and political science.

“I was very interested in the way people perceive and engage in the environmental issue,” Koenigsberg said. “The science of the issue was important, but what makes people care, what makes people not care, and what leads to change on the ground.”

Utilizing this knowledge along with a newfound passion for filmmaking (after a stint in a history of cinema course), Koenigsberg set out on a new career path.

“What better way to combine the science, the policy, but also the really human narrative of why we really care about the land, and our natural resources and our way of life. I decided, that’s what I want to do.”

The Beaver Believers is a film that focuses not just on the lovability of our national emblem, but on their vital role in ecosystems, and subsequently, their role in climate change. 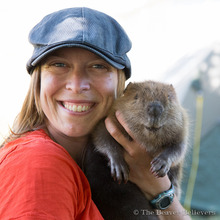 “Our film is about beavers, but it’s also about the most fundamental thing we need in life, which is water. And the biggest challenge we’ve ever faced as a human species is climate change.”

The film explores all of these aspects of how beavers are involved in ecosystems, as well as the people working with them.

“If you think like a beaver, you’re taking care of yourself,” explained Koenigsberg, “but in that very act of taking care of yourself, you’re also trying to make the world better for everything around you; you’re being a positive presence in your community, you’re giving back and you’re helping other people and species out at the same time… it’s knowing that you matter in your little system.”

You can find out more about The Beaver Believers online, and contribute to their Kickstarter campaign.

We’re proud to be Beaver Believers – and we hope you will be, too!